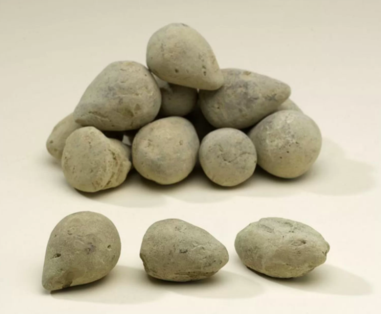 Clay sun-dried sling stones, along with the bow and arrow, sword and spear (javelin) were primary weapons of war in ancient times.

There is an interesting account in Lugalbanda and the Anzud Bird of a year-long siege of Aratta by the Uruk army led by Enmerkar and Lugalbanda. The account states that javelins and slingstones rained down from Aratta  on the army of Uruk. The timeframe for this battle was probably around 3000-2500 BC, with 2700-2600 BC being a more precise estimate.

I find it interesting that almost 2,000 clay sling balls were discovered in the Godin VI:1 oval compound. This time period roughly matches the siege of Aratta mentioned above.

The number and time period of the slingstones discovered provides more clues and consideration for Godin Tepe being the capital of Aratta. This is my opinion, and not likely shared by anyone associated with the Godin Tepe excavations.

The picture below of clay sling stones are from the book On The High Road by Hilary Gopnik and Mitchell S. Rothman, from the section on pages 99-100 by Virginia R. Badler.